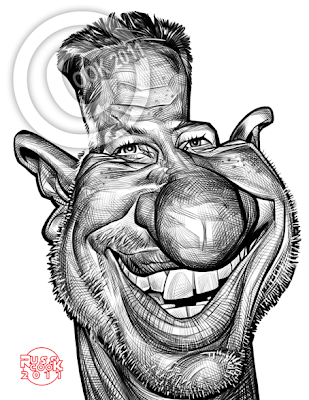 Saw the documentary on England cricket badboy Ian Botham the other night and couldn't think of why he hadn't hitherto entered my mind as a possible subject for facial foolery. As they said in the doc'; he was a national treasure for a time (while spending the rest of it as an anti-hero)
I originally wanted to draw him when he went through his Paul Calf stage but there were few hi-res pic's to work from. So a later, cleaned up Beefy (albeit with a few extra lines) had to be the subject material.
Posted by Russ Cook at 01:06