Just a small post to wish those who check in here 'happy holidays' and seasonal greetings, etc.
Thanks again to those who've joined up as a member and/or taken the time to comment - it's always appreciated - and I hope you check back in 2012 for more visual goodies.

To those who are waiting for artwork: thanks for your patience, they're in various stages of completion and will be with you soon.

See you back here in the new year - good times! 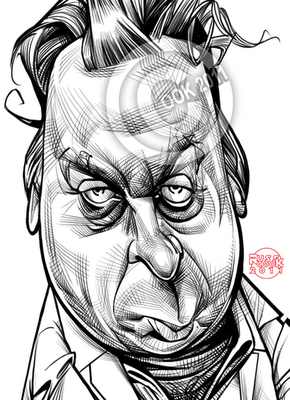 Had to break off from my current work to acknowledge, in virtual graphite, the death of Christopher Hitchens. I first read his writing back in 2006 when my brother and my American sister-in-law visited from the States bringing with them, and leaving behind, a copy of the American magazine 'Details'. There was an article written within, taken from Christopher Hitchens' book 'Letters to a Young Contrarian', which was set out as a top ten of 'advice' for free-thinkers and aspiring writers. It all resonated deeply and I've been a fan ever since. Now sadly he has died far too soon from esophageal cancer, but not without writing and talking on it right up to the end. I can't really think of anyone living who can step into his shoes.
I've sketched him many times although I've never uploaded any drawings - but now is the time.
Jerry Falwell - matchbox - enema! (you look it up). Thank you, Christopher!
Posted by Russ Cook at 13:56 4 comments: