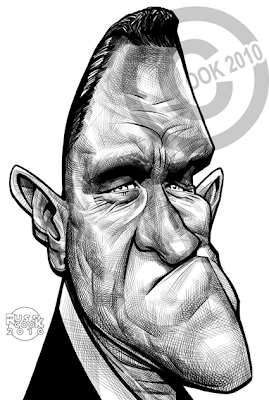 The great American indie film director who has the coolest grey hair on the planet.
Posted by Russ Cook at 22:02 3 comments:

...A microscopic scratch in my catastrophic plan, designed and directed by my red right hand...
Posted by Russ Cook at 00:03 6 comments:

Keepin' on scratchin' with Robbie!
Posted by Russ Cook at 18:35 7 comments: 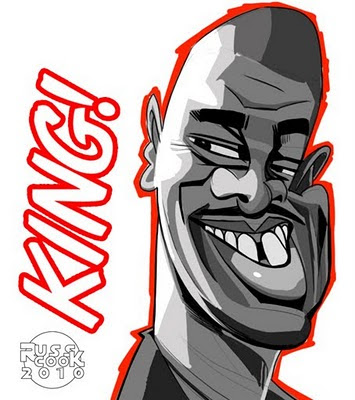 A quickish scratch of the latest call up to the England squad, Tottenham's Mr Ledley King.
Come out a bit clean for a scratch... but there ya go!
Posted by Russ Cook at 00:09 2 comments:

A quick scratch before zeds of the latest tennis champ.
Posted by Russ Cook at 23:55 2 comments:

Who'd win in a face-off between the last Czarnian and the shy and retiring one from the Angel Gang?
I'm guessing it would be a pretty close run thing but Lobo would just take the day as Mean would inevitably get his dial stuck for comic effect and go butt-frenzy, hamstringing his own efforts.
I was a big fan of 2000AD growing up (amongst other publications) and fancied re-visiting some old character fav's. So here're a couple of bad, bad boys.

Here's my effort to mark the passing of the French-American artist who died a couple of days ago at the grand age of 98. I only really know her by her giant spider installation that marked the opening of the (then) new Tate Modern site in London. I like her because she would say that the celebrity and the money were nothing set against the work for which she encouraged everyone to pursue relentlessly. Just as well, as she only really came under the public gaze when she made her seventies.
Posted by Russ Cook at 14:12 6 comments: