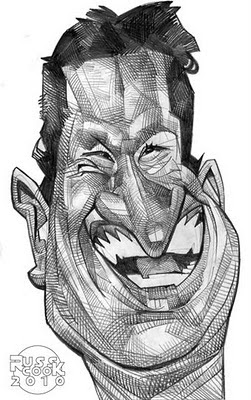 Back to footie... with Rafael Benitez
Posted by Russ Cook at 23:29 6 comments:

Here's a little heads-up for anyone interested in great dip pen and ink caricature work and may not be aware of the great artist that was Derek Bauer. I say 'was' as he is sadly no longer with us.

About fifteen years ago I was moochin' about Oxford centre and was in the Blackwells book shop for art (which is situated in Broad street, slap in the centre of town) just looking at all the beautiful heavyweight tomes of the old masters as well as all the cool street art books and graphic design compendiums, just trying to soak up some inspiration without parting with any hard-earned cash (it was back in the dark ages before reasonable wage-earning and search engines). They'd used a table to pile up some remainder books and rifling through them I discovered a little soft-back with a tantalising cover just 7" by 9" called 'S.A. Flambe And Other Recipes For Disaster' by Derek Bauer. The S.A. in the title referred to South Africa and the cartoons and caricature work within were all concerned with the incendiary situation that had recently 'come to an end' with the multi-racial democratic elections and the inception of Nelson Mandela as the head of the ruling ANC. I had little idea of the finer points of South African politics but as it had been constantly in the news I knew the central characters. Opening the pages I was instantly hooked to the freaked-out drawings that made Ralph Steadman look sober and refined (if that's possible.) 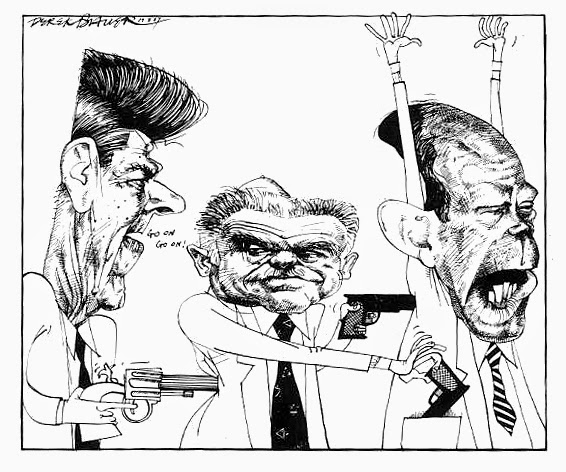 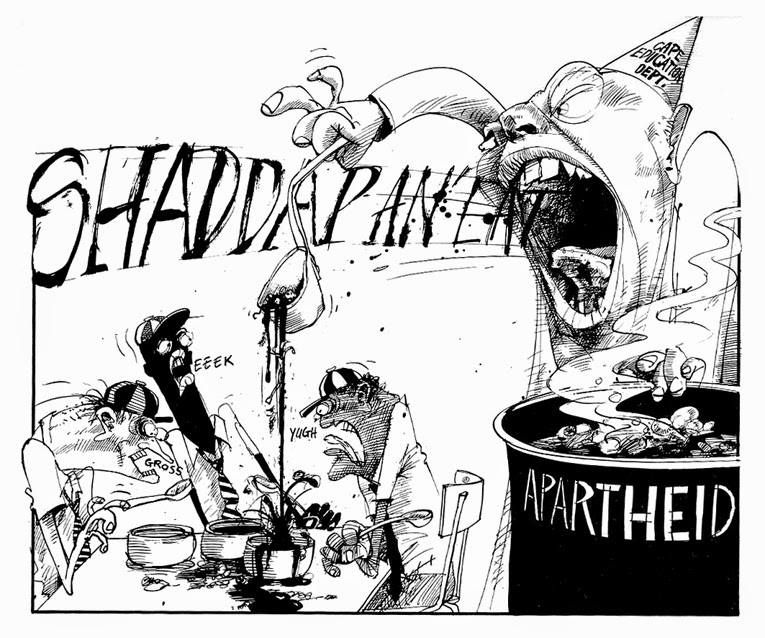 The book was a collection of Derek Bauer's Weekly cartoons for the Johannesburg newspaper 'The Weekly Mail' and every one was rendered with beautiful technique using spot-on caricature work allied with devastating political punch lines. And boy, did he punch hard! Images of emaciated towns folk, destroyed limbs, skulls, politicians as hideous dinosaurs, acts of road kill and even mindless rugby violence were all employed by Bauer to make his salient points hit home. If you wanted funny then he could draw lightning caricatures of Ronald Reagan rallying in tennis with the Ayatollah (the beleaguerred world used as tennis ball) or if you preferred the more truly shocking then he hit you with an 'in memorium' showing the blood-spattered body of Steven Biko on his cell floor (see below). He honed cross-hatching to a fine art while keeping it utterly loose and used the effect of 'mask and splatter' to deadly effect. His acid-dipped nib slashed at his victims making his boss Anton Harber remark "there are not many people who can make an editor worry about defamation in a caricature."
He even managed to presage the Danish cartoon scandal by drawing a fizzing bomb hooded by an arab head scarf, though making a different point. But don't think Derek Bauer was partisan: violence, hypocrisy and the failure of the human condition (of all political and 'racial' stripe) were laid bare on his pad. 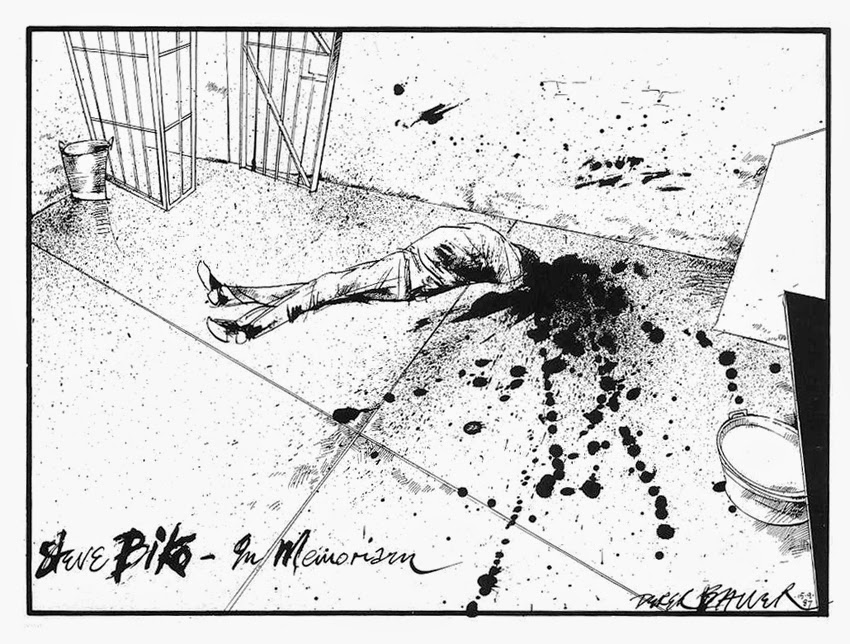 I checked the price tag and was shocked at the paltry sum of 50p that was being asked. I would gladly have paid much more for the slightly creased book and it proved to be the most profitable fifty pence that I'd ever spent. Over the following months and years I cribbed shamelessly from the style I found within the covers and it was never found far from my drawing board. Inevitably, as time passed it was referred to less and less as the art of other amazing artists vied for my attention and S.A Flambe was left up on the shelf with only nominal consulting and dusting. 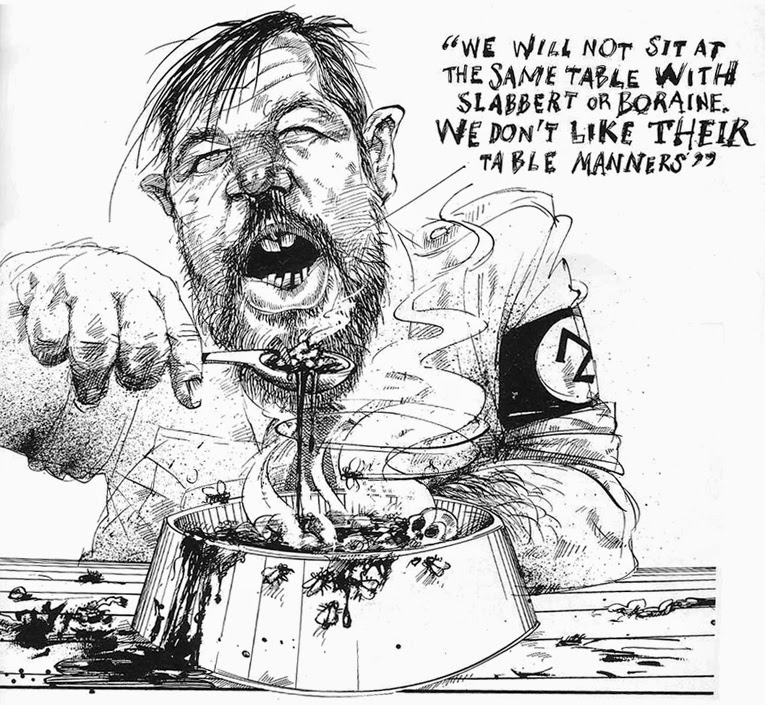 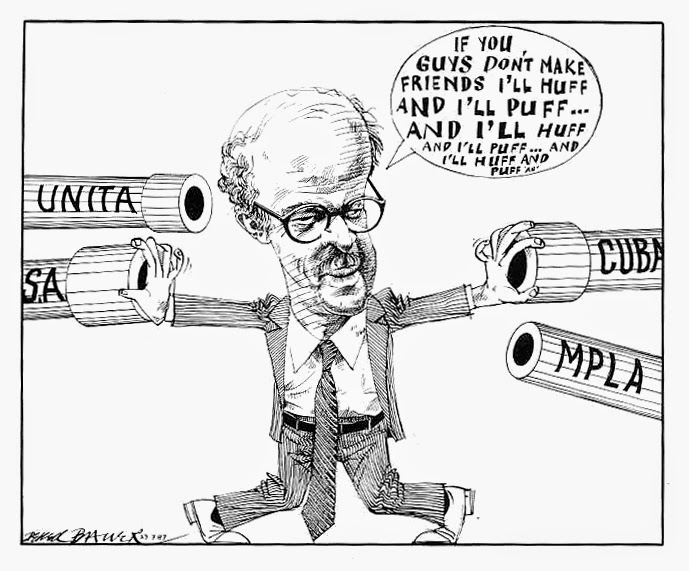 It was only with the rise of the web many years later that It dawned on me I should google Derek Bauer because I'd never heard anything about him since my purchase and general knowledge on the man remained slight. It seemed odd to me then (as it still does now) that I never heard or read about him being referred to by other artists or saw his work reproduced anywhere: why did he only seem to exist in my little world?

So after a quick search on line about a year ago I was incredibly shocked to find he'd been killed in a car accident in 2001. 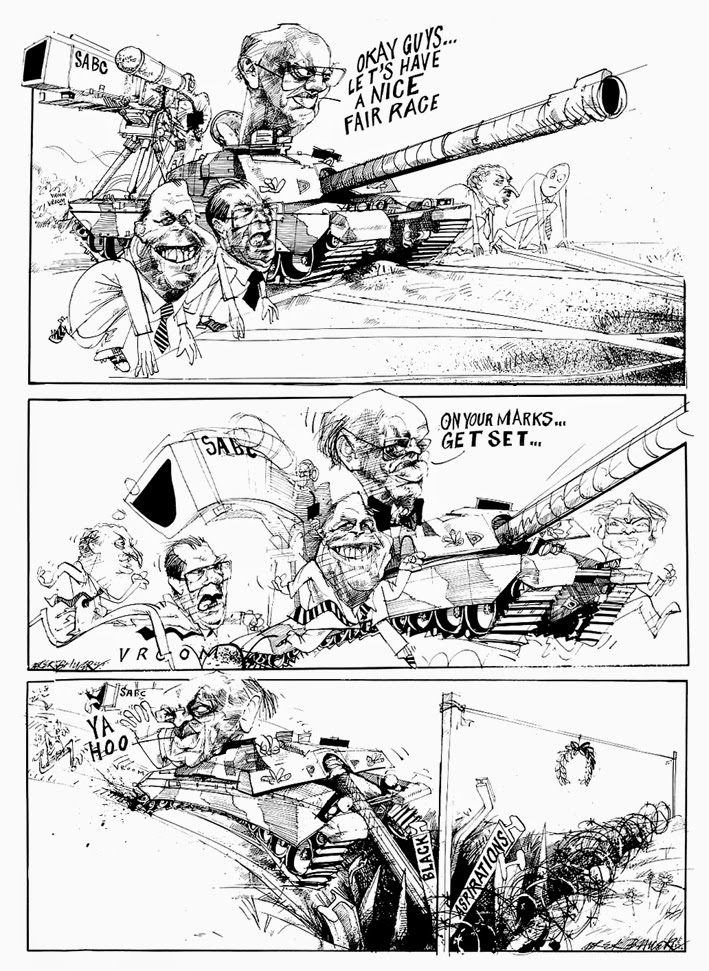 That somebody so skilled and fearless with a pen should be cut down so young and not get the recognition he should've had seemed scandalous and sad. I was further frustrated to find little info on the web and few visual offerings. All the personal info I have to go on regarding Derek Bauer is the short introduction which his editor gave in the book, remarking on the provocative nature of the guy who would marry "drawing skill with emotional disturbance".

If anyone can point me towards a comprehensive site or a blog about Derek Bauer then please get in touch. 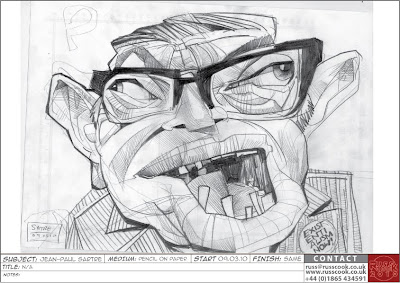 For all those interested in development stages or just want to see how these things get started then here's the initial rough draft I did for the Sartre image in the previous post - very loose and scruffy but it serves the purpose.
Posted by Russ Cook at 21:37 4 comments:

“We do not judge the people we caricature”

“We do not know what we draw and yet we are responsible for what we caricature - that is the fact, dude”


“It is only by our uploads that we are important.”


“One always dies too soon - or too late. And yet one's whole life is complete at that moment, with a line drawn neatly under it, ready for the rubbing out. You are - your caricature, and nothing else. Deal with it - Pah!”

Those are some of the wise words that the great Gallic thinker gave to us in our endless grapple with the graphite, my deep thinking friends. It is with this in mind that I decided to capture his fizzog in vector. That and the fact that he's got a face that screams out for it.

Just added this cool little gadget to the site so that if any of youse is curious as to whether I've etched some dood or doll in the past then you can rifle through my musty ol' library by entering in the desired name and hitting return. It's also handy for me if I wanna quick reference something I've posted. Trouble is; when I tested it I couldn't figure out why some links worked and others didn't , after all, for each caricature I label the post with the subject's name. I soon realised that the search tool only picks up on text that is entered within the actual blog entry. So if I persist in this then I've got to go back through every entry and enter the name somewhere in the blurb!  Oooof!

Latest: I'm now thinking that I'll be saved all the extra work of having to insert names in past posts as It seems that the gadget searches the blog titles as well. At least, that's what I'm reckoning at the moment. Most of my titles already include the name - so I think I'm saved from the devil's own job.

Just let me know if you're trying it and it aint working for you and I'll get rid of the damn thing.

I dunno - all this could confuse a stupid person...
Posted by Russ Cook at 12:28 No comments: 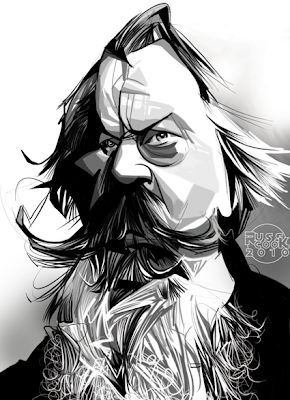 He famously authored many a toe-tapping jig that were top ten hits in his own time and were to go on to help populate the dance floors of many european cities until the advent of 'Crunk' made him passe almost overnight.

He never left his house with his chin topiary knowingly under-primped and was understood to re-style his moustache according to whether his astrological chart showed a planetary conjunction that particular week.

According to his house keeper, whose diaries were released after her death, Mrs Strauss (the third) would prepare enemas of pickled cabbage water and mercury in the belief that it gave the master the extra torque that his whiskers required for long hours composing. Unfortunately, while a nominal increase in lustre was observed, it severely lowered his sperm count and made him listless at the keyboard so it was thus abandoned.
Upon his death in 1899, a lost manuscript purportedly written as a reprise to 'Die Fledermaus' was found in his beard along with a Viennese boy scout who'd been missing since 1872.

Anyway, that's what my mate Loud Al told me down the pub last week.
Posted by Russ Cook at 21:45 2 comments: 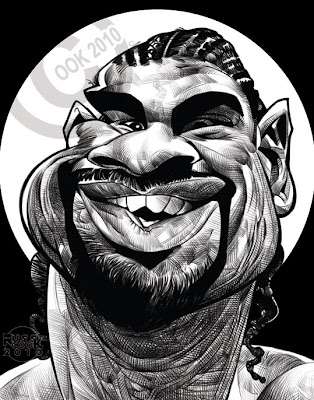 Fearsome and articulate (and currently Britain's best bruiser) it's heavyweight boxing champ David Haye. Bad news for me if he doesn't like himself caricatured...
Posted by Russ Cook at 00:45 9 comments: 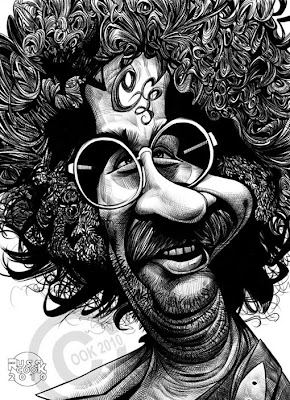 A submission for all 'deadheads' floating free in the blogosphere. Really digging this wacom pencil thing.
Posted by Russ Cook at 12:25 4 comments: