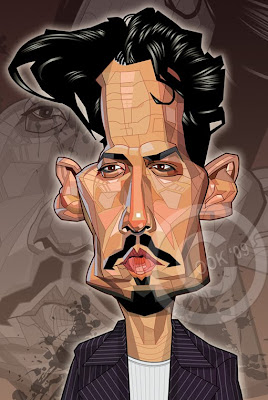 Detail from an as yet unfinished larger picture.
Posted by Russ Cook at 16:21 2 comments:

Oof! are you ready for this?

Bit of a long one - so brew yourself a weapons-grade-strength coffee and read on.

I recently got a blog comment on another forum from Elo, a caricature artist from India, asking If I could give any advice on drawing technique; especially how to improve rendering certain subjects that he found difficult. It's a common question and I think it involves a misconception that is perpetuated by artists and non-artists alike. I thought that maybe now was the time to conflate my murky thoughts on the subject. So find below part of Elo's email (as he wrote it) and my reply which may resonate with others.

"Hi Russ,....give some tips for live drawings bcos am litlle worried about knowlede in anatomy. i can draw any kind of face but i am not able to draw hands,legs in proper shape and pose. Please help me. Thanks again"

Hi Elo - thanks for your comment. You're asking a tough but common question. The reason is a fairly simple one although no-one likes the answer. That answer is - practice!

OK, I know what you’re thinking; “ There’s got to be more to it than that. Isn’t there a quicker route? There must be some nefarious secret that others have discovered that I haven’t”. Something along those lines, perhaps.


I’m aware that when I say ‘practise more’ it sounds like it's an artistic cliché that's easy to trot out. Well, perhaps it is but there’s an underlying truth which exposes a common myth and I’ll try and explain it here:

First, we're all caricaturists and we like to draw faces - right? We do it almost to the exclusion of everything else. After all, people commission caricature artists and portrait artists to produce faces, not hands, so that’s another reason we spend more time doing them.

Second; we find faces easier to draw than hands (fill in your own example of what you find difficult - four legged animals or bodies in motion seem to be notoriously difficult too. )We therefore all assume that somehow we are hard-wired to find some things easy to draw while others not so. Wrong! and here’s my theory why...

When we draw for pleasure (and not a commission) we tend to draw the things that we're sure will look pleasing to our eye. That pleasure comes from the fact that we’ve produced something that’s technically accomplished (by our own standards) and we know before we start that we’re more likely to accomplish certain subjects technically. Alternatively, all the subjects we find hard to draw we tend to not draw for pleasure so much. We've now trapped ourselves in a vicious circle.

So, here's the question; How do we get better at drawing those subjects that we’re not so good at if we don’t draw them for pleasure? The answer is that they must be drawn as ‘study' or ‘practice'. But most of us, if we’re honest, don’t do much of that - if any at all. But if we don’t spend study time drawing the subjects we’re not so hot at then how can we expect ourselves to get any better at them? This is why people believe they’re facing an unsolvable or difficult problem; they can’t see the vicious circle they’re trapped in. We console ourselves that some things are just inherantly harder to draw than others. The unwelcome truth is that there is nothing intrinsicly harder about drawing horses legs or hands or bicycles or any other example you wish to give. This is borne out by the fact that we all find different things hard to draw. As far the human eye is concerned they’re all of them made of the same stuff: outlines, shadows, reflections, highlights, etc. Therefore the problem doesn't lie in the subject but how we’ve chosen to spend our time in what we’ve observed, tried to understand and then gone on to practice drawing in the past.

I'm obviously not saying that drawing a leaping horse should be no harder than drawing a cricket bat. One requires barely 5 minutes labour to replicate accurately, the other considerably more. So bear in mind we're comparing like with like when it comes to the artist's physical input.

Still have your doubts?

Here’s an example. I have a friend who’s an excellent cartoonist whose speciality is cartoon animals which he employs to embellish his natural history lessons for kids who visit the museum where he works. But he rarely draws people. Doesn’t enjoy it. Doesn’t think he’s so good drawing them. But why should he be so great at animals but not people? The answer; he rarely draws people.Why doesn't he draw people? because he doesn't enjoy it. Why doesn't he enjoy it? because when he does he's not so happy with the results compared to when he draws animals. So he carries on sticking to drawing animals(and getting better at doing so, no doubt). He may disagree, but I'm convinced that if he applied his undisputed artistic skill to practicing the human form he would improve it. Not only that but make his human cartoons the equal of his animal cartoons.


Don’t get me wrong. I’m certainly not saying that because I'm expounding on this that I can draw any subject with technical brilliance; far, far from it. I find many subjects very hard to draw and the examples I’ve given above are no exception. The difference is; I know why. And I know what I’ve got to do if I want to get better at drawing them. If you want get better at drawing hands and be able to draw them intuitively then set good time aside to draw nothing other than hands; from all angles and in all light conditions. The more you draw them the more you’ll find their common features. You’ll also see 'shapes' that you hadn’t noticed before which are there from anatomy. After a while you’ll start to ‘understand’ hands. (check out the work of the old master Paulo Ucello whose drawings showed how he constructed his horses from circles).

Try and be as honest with yourself as you can when it comes to assessing your own work. Ask yourself; ‘Is that part of the drawing working?’ if not, why not? (Don't waste time trying to save a badly formed drawing with furious detail - this is very true of caricatures).

In summation I’d say remember general form, observation of detail, training the memory and honest enquiry of your own efforts.

The last of the Kennedy brothers, who died yesterday.

Couldn' t let England's winning of the ashes series go unmarked without a quick sketch of its star player.

...or is it Vincent Price in a fright-wig? Either way (and just like the last post) all of them have the ability to leave you thrilled or chilled once they start to intone into a microphone. It's all a question of taste.
Posted by Russ Cook at 17:31 2 comments:

...born to be caricatured! If you're within arms reach of a sharp nib and a clean sheet then you can't resist...

In reply to some recent questions regarding technique (secret or otherwise!) I thought I'd stick a post here to try and answer some of them.

The last two posts (Bolt & Putin) were done in 1hour 30 minutes - 2 hours each. I'm not sure exactly as I weren't timin' 'em! On average I spend an hour on my drawings (always A4 as they're easy to scan and upload) I spent a little longer on the last two as I wanted to give them more impact.

They were also both first attempts - which is certainly not always the case. Some caricatures can be the result of three or four attempts - even then, some of those can be discarded 3/4 of the way through when I reluctantly realise that I've been fooling myself and it's never gonna work out between us - ha!

With that last sentence in mind it was interesting to realise that when I started Usain Bolt I knew within the first minute of work I was drawing something that was gonna turn out to my satisfaction. I've realised as time's gone on that you've got to get the basic morphed shape correct first before potentially wasting time later relying on furious detail to 'save' a bad drawing. I always believe that likeness is more important than flashy drawing - I'm a big fan of Al Hirschfeld: simple but expressive lines. But! If you can marry great likeness with 'flashy drawing', then - knockout!!!! Ha, ha!

As to 'my secret' I'm afraid there's no secret other than that which we've known all our lives; practice!!!! If you make a resolution to draw every day then I promise you that in six months time you will look back on your drawings and see a marked improvement. More than that you will develop your own style which is the icing on the cake.

You Aint Ever Gonna Catch Him! 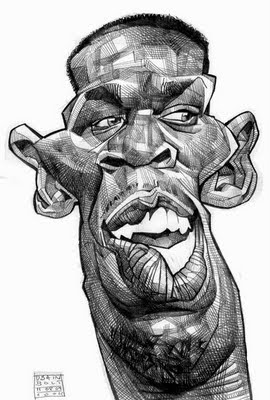 Earlier this evening I watched Usain Bolt make history again in the 100 metres. Who else could leave so far behind Tyson Gay whose own time made him the fastest American ever?
Had to get the man's likeness etched in graphite!
Posted by Russ Cook at 23:41 2 comments:

Super-rough for an imminent colour study of the Stones' sticksman
Posted by Russ Cook at 00:24 No comments: 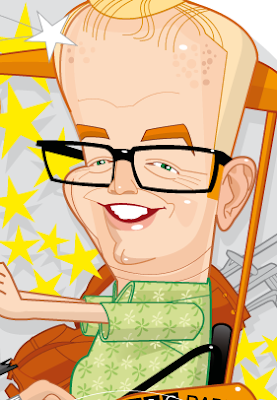 (detail)
New image of Chris Evans on the site. Go!
Posted by Russ Cook at 15:41 No comments: