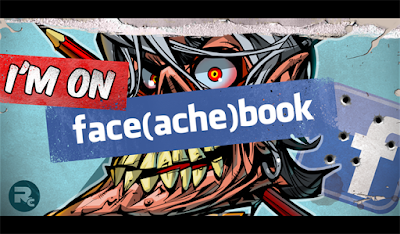 After a long period of avoiding the place I've decided to re-activate my long-dormant Facebook account, which was started - and pretty much stopped - back on 2010.There have been several good reasons for this: not least one of them being that I had artwork hi-jacked and posted to a fake Russ Cook Facebook page. I have to stress that were this other site a 'fan-page' then I would feel very complimented, have no problem with it and endorse it but the site gives all the impression that it's hosted by me and friends and family have been taken in by it. It shows erroneously posted info and, being fake, has not made some necessary replies to some important communications from visitors - replies I would always endeavour to make. I don't know whether the site-host has sold versions of my artwork - they could only be of a lo-res quality - but this would be another reason to avoid it, notwithstanding the small matter of it being theft. Attempts to have the fake facebook page removed have failed - hence the re-boot of my own.

I haven't posted much official Facebook stuff yet, but from this point in time I shall be posting various artworks including caricatures, comic art, cartoons and paintings as well as artwork related news. Pictures of pets and political/religious expostulations will be kept to the almost non-existent.

If you wish to visit and 'like' my official page (link here) then you'd be very welcome and I promise to answer all direct, sensible and art-related questions. If you find Facebook an easier option for you to keep up with what's going on then come on over and hit the like button.

Look forward to seeing you there.
Posted by Russ Cook at 12:04 No comments:

John Lydon in Sketchbook Pro.
Posted by Russ Cook at 23:11 No comments: 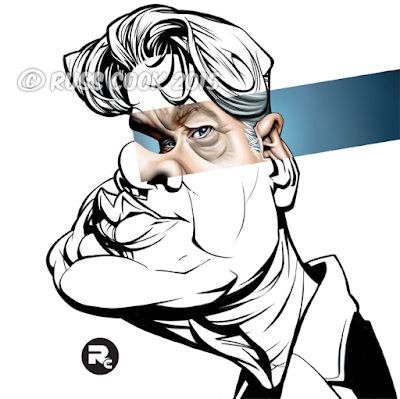 Had the film poster of Jacob's Ladder on my wall for years. Bit of a cult classic round our way.
Anyway, I'd like to say that my pic of Tim was just me experimenting with how to represent caricatures in a slightly different, but hopefully interesting, way. Or it might just be a case of me suffering from chronic lazyitis. Either way; 'twas fun to do. Thinking I might start a new series of images in a similar vein and calling it 'Complex Simple' (Freud?). Thinking I might just go to bed.

Click on the image for larger whatnot.
Posted by Russ Cook at 00:11 No comments: 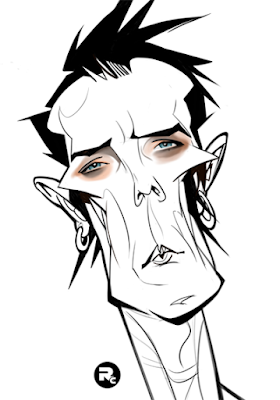 Sad to read this morning of the death of Scott Weiland. Have to admit that Stone Temple Pilots went by me a bit - though I was totally on board for Velvet Revolver, who still rock my turntable. He fought demons that had hounded him for years but he was a brilliant front man and vocalist. If there's a rock 'n' roll afterlife then he'll definitely be among the better dressed. Cheers for the music, Scott.
Posted by Russ Cook at 19:13 No comments: